EIGHT new leaders of the Real IRA were arrested following a major garda operation in the capital.

Heavily armed detectives swooped on the suspected senior members of the organisation as they were holding a "strategy meeting" at a house in Tallaght. 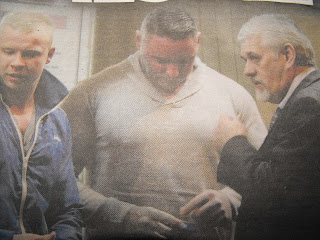 The eight men were arrested at a property in Glenshane Crescent at 8.30pm last night after a long running intelligence gathering operation.

We understand that two of those in custody had previously been caught attempting to extort cash from a Dublin businessman.

The Dublin faction of the terror group has been in disarray since the murder of ex-terror boss Alan Ryan last September.

In another blow to the criminal organisation, a major dissident figure was arrested at a storage site in Ballymun.

Gardai discovered a massive amount of "bomb-making material" and ammunition during the raid in Cloghran yesterday afternoon.

The 46-year-old arrested was being questioned at Ballymun Garda Station today.

Senior sources confirmed that both operations are linked and described the arrests as a "devastating blow" to the criminal organisation.

The eight men arrested in Tallaght are aged in their 20s to 40s and were being questioned at separate garda stations in Dublin today.

Heavily armed detectives raided a house in Glenshane Crescent at 8.30pm last night and foiled what has been described as a "strategy meeting".

"It's believed what was smashed was the council of the New IRA – the men who have emerged as the leading figures since the death of Alan Ryan," a senior source explained.

"This was highly planned. The men were sitting in a round table-type situation and were clearly in a strategy-type meeting."

Two of those arrested were previously charged with membership of the IRA following a major garda operation in Clondalkin in April.

We can reveal that both men, who are aged in their 30s and 40s, were barred from associating with each other as part of their strict bail conditions.

The news of the busts comes as we have learned that a senior dissident figure from the North was booted out of the IRA this week.

The operations come during a highly volatile period in the IRA – as the new alliance of members tries to muscle out associates of murdered Real IRA boss Alan Ryan.

Several of Ryan's closest allies who were expelled from the organisation have formed splinter groups and are eyeing up rival dissidents.

Others have been subject to abductions, kneecappings and punishment beatings as part of the "clean-up drive" of the Real IRA.

In January, a key henchman to Alan Ryan – Deccy Smith – was blasted in the leg by a former associate.

Kinsella, who was a close friend of Alan Ryan, was kneecapped in what was seen as another warning attack by the Real IRA.
at 8:09 AM
Email ThisBlogThis!Share to TwitterShare to FacebookShare to Pinterest