The home of Sinn Féin’s Martin McGuinness has been targeted by paint bombers. Although there have been suggestions that this may well have been a DIY Job, as Marty builds up to his second attempt at The Irish Presidency.

One wonders was it Royal Blue? 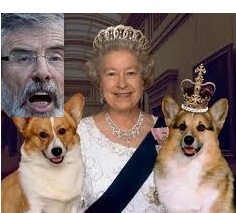 Stormont’s Deputy First Minister said those responsible for the attack on his house in Derry would not deflect him from efforts to “build a peaceful and prosperous future”.

Mr McGuinness said his grandchildren were in the property at the time of the incident last night.

The Sinn Féin MLA has received death threats in the past from dissident republicans opposed to his involvement in the power-sharing arrangements at Stormont.

“This was an attack not just on me but on my family too, including my grandchildren who were in the house at the time,” Mr McGuinness said.

“I would like to thank my neighbours for all their help and assistance in the aftermath of the attack.”

He said the vandalism followed an arson attack on a Sinn Féin member’s car in Derry last week and damage to some of the party’s election billboards and posters in the city.

“The people behind these attacks have nothing to offer the community and they are intent on dragging society back to the past,” he said.

“Neither I nor the people I represent will allow them to do that.

“I will not be deflected from my work as a Sinn Féin representative and as Deputy First Minister of building a peaceful and prosperous future for all our people and creating a society built upon equality and inclusion.”
at 2:37 PM
Email ThisBlogThis!Share to TwitterShare to FacebookShare to Pinterest