Continued detention of Irish Republicans by way of selective internment, a regime supported and encouraged by Provisional Sinn Fein/PIRA. 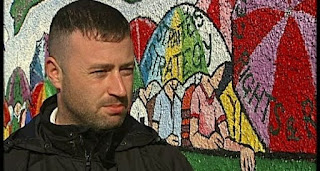 A west Belfast man charged with allegedly plotting the activities of a dissident republican terrorist group has been granted bail to go on holiday to Spain with his wife.

Carl Reilly (42), of Pollard Street, is currently awaiting trial on charges of directing the activities of a terorrist organisation and professing to belong to a proscribed organisation, namely the IRA.

at 2:47 PM
Email ThisBlogThis!Share to TwitterShare to FacebookShare to Pinterest