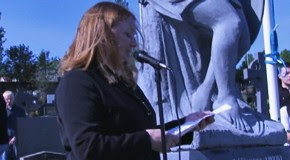 Old Bailey bomber Marian Price has been charged with encouraging support for an illegal organisation.
The 57-year-old veteran republican was arrested in west Belfast on Friday in connection with a parade in Londonderry on Easter Monday in which a masked paramilitary spoke to crowds in the city cemetery.

Price, and her sister Dolours, were among those convicted of the Old Bailey bombing in 1972, which killed one person and injured 200 others.


She is now a spokesman for the 32 County Sovereignty Movement, which is widely regarded as the political wing of the Real IRA.

Price is due to appear at Londonderry Magistrates Court on Monday.
at 1:26 PM
Email ThisBlogThis!Share to TwitterShare to FacebookShare to Pinterest