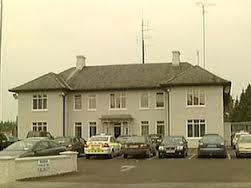 
Sinn Féin leader Gerry Adams TD has said he supports the Garda Síochána arrests of 16 people following a Real IRA display at the funeral of one of paramilitary group’s leading figures. Gerry Adams TD has supported the view offered to the media by other senior Sinn Fein figures that Alan Ryan and the Real IRA are de-facto drug dealers and gangsters.
A group of men dressed in combat gear fired a volley of shots over the coffin of murdered Alan Ryan on Saturday in Donaghmede, Dublin.
In today's raids, gardaí seized three imitation firearms, mobile phones and computers along with documentation. Those detained ranged in age from 16 to 60 years old.
Mr Adams said there was no place for such displays or for such organisations. He said “groups involved in gangsterism and crime masquerading as the IRA” had no place in Irish society.
“The IRA did the right thing on British resistance and when the peace forward came forward. They sued for peace when the chances were there,” he said. “Anybody who is a genuine republican should be about the process of building a genuine republic and not involved in these kinds of exercise which is not about republican struggle,” he said.
Asked was the Garda strategy on Saturday to maintain a distance the correct one, the Sinn Féin president replied that he allowed those involved in the operations to make the decisions on the day.

Real IRA leadership have sanctioned the execution of three significant crime figures in Dublin in retaliation for the Murder of Real IRA Commander Alan Ryan, all three are to be executed before Christmas 2012
There have been 14 arrests made this morning (13 men and 1 woman) over a Real IRA show of strength at the funeral of one of its key figures Alan Ryan in the Republic. The key suspect remains a senior PIRA hitman for hire who is believed to have collected a 50K contract from the Continuity IRA after it was alleged that Alan Ryan had murdered a member of the Continuity IRA in Dublin. Both before during and after Alan Ryan’s funeral, senior members of Provisional Sinn Fein in Dublin were briefing national and international media that Alan Ryan and the Real IRA in Dublin are de-facto drug dealers and have no support in the community. It is widely believed that senior British agents within the Real IRA have been protecting British agents within Provisional Sinn Fein both north and south with a no retaliation policy.
Yesterday, the REAL IRA sanctioned the execution of three senior criminals in Dublin in retaliation for the murder of Alan Ryan, while the actual suspect in the Alan Ryan murder cannot at this time be targeted, the Real IRA was to send out a clear message to the criminal fraternity in Dublin that the REAL IRA are not to be challenged. The Real IRA in Dublin have been told that once the three criminals have been targeted that is to be an end to retaliation for Alan Ryan’s murder and that they are to get on with business as usual. The key suspect will remain a core target, however, that will not happen in the near future as he is out of arms reach.
A group of men dressed in combat gear fired a volley of shots over the coffin of murdered Alan Ryan on Saturday in Dublin.
In follow-up operations, gardaí carried out a series of raids on homes across Co Dublin and neighbouring counties from 6am this morning.
A Garda spokesman said the operation is ongoing and while a number of arrests have been made, further arrests cannot be ruled out.
Ryan was head of a Real IRA faction in Dublin and had been linked to extortion rackets.
The 32-year-old was murdered in broad daylight when a gunman shot him several times in the grounds of an apartment complex in Clongriffin, north Dublin, on Monday September 3rd.
Scores of dissident republican supporters attended the funeral in Dublin.
Garda Commissioner Martin Callinan later rejected criticism of his members for failing to intervene when shots were fired at the funeral.
Mr Callinan said it was not the case that dissident republicans had been allowed to act with impunity. The Garda had a proud track record in combating dissident republican activity, he said.
He expressed disappointment that agreements made between the Garda and the organisers were not abided by.
Ryan's family issued a statement earlier this week saying his funeral was “a fitting tribute to the best ideals of republicanism”.
They described him as “an active Irish republican” who was “proud to be known as such and we are proud of him for being one”.
at 3:24 AM
Email ThisBlogThis!Share to TwitterShare to FacebookShare to Pinterest