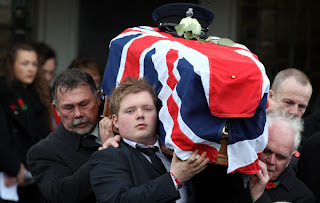 David Black (52) was shot last Thursday during an ambush by suspected dissident republicans on a motorway in Co Armagh as he drove to work at Maghaberry high-security prison.

A kilt-wearing bagpiper playing a lament led six prison officers wearing navy blue suits and caps as they carried Mr Black's remains through the empty streets of Cookstown, Co Tyrone. Prison service hat and gloves and the British flag were carried on the coffin as lined officers formed a guard of honour.

Mr Black was a member of the Orange Order and members of that organisation were also present at the funeral.

The head of the Presbyterian Church, Dr Roy Patton, said it was an attack on the whole community.
“We are together in this, totally united as churches, politicians, civic society, ordinary men and women who feel for you today in your unspeakable loss, and who in the strongest possible terms are outraged by such an evil deed,” he said. “This attack on a prison officer was an attack on this whole community.”

He said all those who served the community enjoyed total support.

“As a people we stand together as those who have chosen a different way than the way of violence, that we have no desire whatsoever to be dragged back into the darkness, that what you have brought about in the death of David Black is totally unacceptable as far as we are concerned as well as being totally wrong in the eyes of God,” he added.

Kyle Black told of his pride in his father and said he had a message for his killers.

“They can take daddy from us ... they can deprive mummy of a loving husband, but they can never take away the love that we have in our hearts and the memories that we will all cherish for the rest of our lives," he said. “Daddy may not be here in person but he will be with us all in the future.

“Although daddy was small in stature, he has had a large impact on the lives of everybody that loved him and has left a huge legacy, one that my mummy, Kyra and myself will be so, so proud to carry on.”

Mr Black’s cousin Jim Slaine told mourners the killers were cowards.“They have probably never done a decent day’s living, unlike the man they killed," he said. “We all hope that the perpetrators get what they deserve in life but we all know they will have to live with what they have done and they will meet their maker.”

Mr Black, who had more than 30 years’ service, was the first prison officer to die at the hands of paramilitaries since 1993. Following his death, his family appealed for no more violence in a statement issued through a clergyman in Cookstown.

The Northern Ireland Assembly stood for a minute’s silence in respect for the victim yesterday and several members paid tribute to him.

Over the weekend, US secretary of state Hillary Clinton joined politicians on all sides of the Northern divide who condemned the murder.

Three men being held in connection with the murder were yesterday released without charge. Two were arrested on Friday morning in the Lurgan area and both were released unconditionally on Sunday night, according to the PSNI.

A 29-year-old suspect arrested in Co Leitrim on Friday night was released from Garda custody last night and a file is being prepared for the DPP.
at 9:50 AM
Email ThisBlogThis!Share to TwitterShare to FacebookShare to Pinterest