Dissident republicans have been blamed for planting the device, which was detected at around 2pm on Sunday outside the policeman's home in the Upper Newtownards Road area. Here on Dissident Republicans we warned yesterday that Dissidents would be striking hard and early in the New Year... 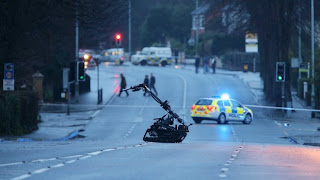 Officers believe the bomb was placed at some time in the past 48 hours and said it was "clearly intended to kill".

ACC George Hamilton said: "It is very fortunate that this device was detected before it exploded and that no one was killed or seriously injured.

"It was clearly intended to kill the police officer. His family and neighbours in the vicinity were also put at risk of serious harm.

Our belief is that this attempted murder was carried by those opposed to peace from within Dissident Republicanism.
ACC George Hamilton

Several homes have been evacuated in the Upper Newtownards Road area as army bomb squad officers deal with the suspect device on Sunday afternoon.

Local UUP MLA Michael Copeland called the attack a "thoughtless act of premeditated violence."
He told UTV: "It seems that an under car booby trap or a device of some sort has been found beneath a car rumoured to belong to a police officer.

"A device like that doesn't know who's in the vehicle. It could be his wife, children or grandchildren - it's a thoughtless act of premeditated violence."

SDLP Policing Board member Conall McDevitt condemned what he described as a "cynical and deplorable" attempt to target an officer.

He said: "Those seeking to target police officers are undermining not only the stated will of the people of Ireland who have long since rejected violence, but also the desire for a new beginning for policing in the North, which is shared by the majority of citizens."

"PSNI officer escapes terror bid to murder him at Belfast home with under car bomb. Total disregard for life of officer and family".Robin Newton MLA said the only intention of those who placed the device was murder.

"Those who placed this potential bomb have nothing to offer the community except heartache and sorrow," said the DUP man.

"The thugs who carry out this type of an action are rejected by the vast majority of the community as being wicked and evil and wicked who care nothing for innocent life.

"I pay tribute to the PSNI officers and the bomb squad officers who risked their lives to make the area safe not only for the intended victim but all who live in close proximity."

East Belfast Alliance MLA Chris Lyttle said: "My immediate thoughts and prayers are with the officer and family directly affected by this cowardly and futile act and the people working to restore safety to all residents in the area.

"Those behind this incident have absolutely nothing to offer the local community and are only intent on taking Northern Ireland back to a time of deep division through violent attacks."

Shadow Secretary of State for NI, Vernon Coaker MP, said: "An attack on the police is an attack on the entire community. The bravery of the PSNI is in stark contrast to the actions of those who planted a bomb under this family's car just days after Christmas."

Police have appealed for anyone with information to get in touch.

ACC George Hamilton continued: "Anyone who was in the area of the Upper Newtownards Road and witnessed any unusual activity in or around this area between the junction of Cabinhill Park and the Knock Road between Friday afternoon and lunch time today is asked to contact detectives on 0845 600 8000."
at 10:40 AM
Email ThisBlogThis!Share to TwitterShare to FacebookShare to Pinterest