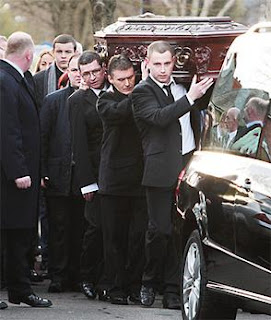 O’Hare described the crime godfather, who was a close friend before he was gunned down last week, as one of Ireland’s “martyrs”.


He said that the 65-year-old was part of the “terrible beauty” of the Irish struggle against British colonialism. After the funeral, he helped carry the coffin from Killester’s St Brigid’s Church.


O’Hare had arrived at the home of the veteran gangster shortly after 8am to help with arrangements for the Mass.


The shooting dead of Kelly (65) near his home last week was described in the church as “evil” by Monsignor Alex Stenson.


The parish priest said that the killing was “a dreadful act” which had violated his family and the entire community.


Kelly – who groomed many of the city’s most notorious criminals – was gunned down just yards from his home on Furry Park Road nine days ago.


This morning a lone piper marched ahead of mourners as his coffin was carried shoulder high from his home to the church.

Gardai kept a low profile as several hundred people, including some senior criminals, attended the Mass.


The chief mourners today were his five remaining sons and two remaining daughters.


His son Robert and daughter Jenny predeceased him and his wife Ann died of cancer last year.


Monsignor Stenson, who lives on the same road as the slain gang leader, said his death by shooting outside his home was a “terrible crime” and he called for an end to all further violence.


He said the pain of his grieving family was very strong as they had lost a father, a grandfather and a great-grandfather.


To his family, he was extremely generous and was renowned as “a giver” who will be deeply missed by his loved ones.


His children remembered fondly their family holidays in Achill Island, which was one of Kelly’s favourite holiday destinations, he said.


The priest said that Kelly was in the midst of the community and it was a blessing that local people were able to go to his aid and pray with him as he lay dying on the ground.


He was buried in an ornate dark wood coffin that was engraved with scenes from The Last Supper.


Kelly (65) was close friends with O’Hare and the pair regularly drank together.
at 5:08 AM
Email ThisBlogThis!Share to TwitterShare to FacebookShare to Pinterest