Adams Private Healthcare a Pain in the Assets
Sinn Féin leader Gerry Adams is examining whether any tax is due on an American businessman’s payment of medical expenses for him in the US. Initially Gerry Adams TD had explained his private medical care treatment a sbeing something he had paid for out of his own pocket, however, it has now emerged that the $30,000 BILL was picked up by provo cheer leader BILL Flynn. While dozens of Irish people lay on hospital trolleys in the Louth constituency that Adams allegedly represents, Adams was being treated to Private Healthcare in the USA. 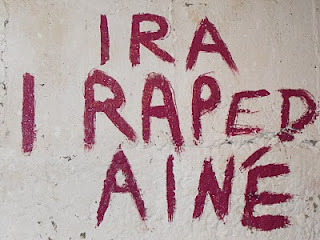 This writing appeared on the walls in Dundalk after it was revealed that Gerry Adams TD had protected his child rapist brother Liam Dominic Adams. 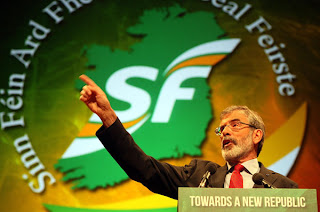 Gerry Adams TD who criticised the Government for supporting private Healthcare is again exposed as a hypocrite.

Bill Flynn, former chief of life insurance giant Mutual of America, is estimated to have paid €30,000 late last year for Mr Adams’s prostate procedure.
The Sinn Féin leader, who is TD for Louth, is tax-resident in the State, according to a party spokesman.
The Irish Observer asked yesterday whether Mr Adams planned to seek an exemption from gift tax on grounds that Mr Flynn’s payment was to defray medical expenses.
“Mr Adams is consulting with his tax advisers as to whether any taxation arises from this medical procedure, and if there is an issue he will ensure that he is fully tax-compliant,” the Sinn Féin spokesman replied.
In general, gift tax applies where the person making the gift or the recipient is resident or ordinarily resident in the State at the date of the gift.
However, gifts received exclusively for the purpose of discharging the qualifying expenses of a person permanently incapacitated due to physical infirmity can be exempted.
The gift recipient must apply to Revenue to avail of this exemption, said a Revenue spokeswoman, who stressed she was speaking generally and not referring to any individual case.
Mr Adams told RTÉ interviewer Marian Finucane last weekend that the procedure in the US was to deal with a “long-standing and very painful complaint”.
Gerry Adams td, sinn fein, healthcare, private healthcare, medical expenses, tax exemption, American healthcare, USA healthcare
at 12:50 AM
Email ThisBlogThis!Share to TwitterShare to FacebookShare to Pinterest