Shortly after the coffin bearing the remains of the former president of Republican Sinn Féin was carried into St Coman’s cemetery in Roscommon town, gardaí in riot gear confronted mourners.

Officers were involved in a standoff for several minutes with some mourners which had accompanied the funeral procession on the route from the Church to the cemetery.

While the funeral Mass was characterised by typical tributes to a loved father grandfather, teacher and neighbour , the Republican’s final journey to the cemetery outside the town was a more tense affair.

At the end of the mass his son Conchúr had criticised the “heavy handed and provocative” way the funeral had been policed and he appealed for the funeral procession be allowed proceed to the cemetery with the dignity “and the honour he is due as a Republican leader”.

Mourners had been told that there was “not a sectarian bone” in Ó Brádaigh’s body and his son pointed out that he was being laid to rest in the Protestant section of the cemetery alongside his wife’s family.

At the beginning of the Mass, Ó Brádaigh’s grandchildren carried a number of his possessions , including his glasses, his walking stick and book of poetry to the altar to symbolise different facets of his life.

Parish priest Fr Eugene McLoughlin told the congregation that while Ó Brádaigh was known by many people for his republican ideals he was also a devoted husband and father and a loving grandfather.

He added that “sadly we have moved a long way from these lofty ideals” with many young people forced to emigrate and the gap between rich and poor widening.

There was tension as mourners walked behind the coffin in the blazing sun to the cemetery with some stewards wearing armbands of green white and gold and men clad in black trousers white shirts and black berets, most of them wearing Easter lilies appearing to object to the strong Garda presence.

At the cemetery mourners became angry as gardaí surrounded the grave and there were jeers and shouts for respect for the family.

After some jostling officers were pushed back and gardaí in riot gear raised shields and briefly confronted those involved in the melee.

Calm was restored after the “stewards” appealed to mourners to turn their backs to gardaí and form a circle to keep them from the grave.

Gardaí remained at the scene long after the graveside orations were delivered.

The president of Republican Sinn Féin, Des Dalton, who gave a graveside oration condemned what he described as disgraceful scenes at the funeral.

He said there had been total and complete disrespect shown to the family by forces of the State. “Even in death that same State fears him today”, he said to cheers.

The funeral is taking place in Roscommon this afternoon of veteran republican Ruairí Ó Brádaigh. 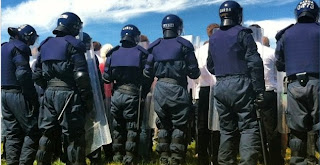 Scores of mourners lined the street as the Longford-born former TD, internee and Republican Sinn Féin founder and president was taken from Smyth’s Funeral Home shortly after 8pm.

Gardaí, who had deployed two armed response units, several unmarked cars and a number of marked units, walked along with the cortege as it travelled through Roscommon to the Sacred Heart Church, where several more officers were waiting.

Monsignor Charles Travers spoke of a man with a “passionate love for our country” which Mr Ó Brádaigh was prepared to “sacrifice for.”

“The two words that I have heard uttered to describe Ruairí over the last few days were that he was a man of conviction and a person of integrity, a man of honour,” he told the congregation.

“This present love for country was not confined to country, it was shared even more fully with his beloved wife Patsy and his family,” Msgr Travers said.

“Ruairí had all the facets of life that were special to him, he gave generously of himself without counting the cost, whatever the cost may be,” he added.

Mr Ó Brádaigh will be buried in St Coman’s Cemetery this afternoon following 11.30am Requiem Mass at the Sacred Heart Church in Roscommon.
at 7:39 AM
Email ThisBlogThis!Share to TwitterShare to FacebookShare to Pinterest