Veteran republican Marian McGlinchey has been convicted of two charges arising out of a republican protest in Belfast over three years ago. 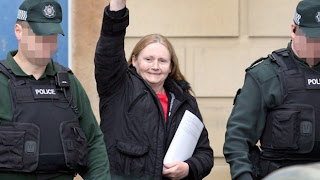 The 59-year-old was accused of resisting and obstructing police after a white-line protest in the New Lodge area of the city on 10 July, 2010.

McGlinchey, who is also known as Marian Price was not at Belfast Magistrate's Court on Monday, for the brief hearing.

Her lawyer said that she had been excused because of long-standing medical problems.
The case was adjourned until 2 September. At an earlier hearing, it was said that McGlinchey had no fixed address.

McGlinchey served a jail sentence along with her late sister Dolours Price for the 1973 IRA bomb attack on the Old Bailey in London.

Her licence was revoked in 2011 and she spent two years in custody before she was finally released earlier this year.
at 11:15 AM
Email ThisBlogThis!Share to TwitterShare to FacebookShare to Pinterest