Two vehicles were stopped on Wednesday morning by the Special Detective Unit and Crime & Security Section and five men in their 20s were arrested. 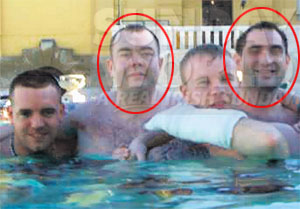 They were detained under Section 30 of the Offences Against the State Act, 1939-'98 for membership of an unlawful organisation.

The suspects were taken to various gardaí stations in the Dublin Metropolitan Region.

Four vehicles were recovered and when gardaí carried out follow up searches, they seized a number of firearms, assorted ammunition and component parts for explosive devices.

All items are also due to undergo technical examination.

A woman in her late 20's was also arrested as part of the operation and is currently detained at Ballymun Garda Station under the same act.

A gardaí spokesperson said: "Investigations are ongoing and further searches continue."
at 11:41 AM
Email ThisBlogThis!Share to TwitterShare to FacebookShare to Pinterest