MI6 have moved to protect Gerry Adams TD from prosecution for with-holding information into the activities of two serial child rapists, His Father Gerry Adams Snr and his Brother Liam Adams.

Prosecutors have directed no prosecution of Sinn Féin President Gerry Adams over claims he withheld information about his brother's sex abuse from the police.

Gerry Adams has been accused of waiting almost a decade to tell detectives what he knew about his brother Liam.

Liam Adams was convicted this week of abusing his daughter Áine from when was she aged four until she was nine.

The PSNI confirmed a decision was taken in 2010 by the Public Prosecution Service not to launch a case.

"We will re-examine the transcripts (of the recent court case) but all the facts in our knowledge in 2010 have not been moved on materially since the recent trial."

Adams, 58, from Bernagh Drive, Belfast, was found guilty of ten offences, including rape and gross indecency, against his daughter Áine.

The truth has now been fully exposed in a Belfast Courtroom, where Liam Adams has been found guilty of being a serial child rapist, Liam Adams was a senior member of both the Provisional IRA and Sinn Fein, he was promoted in both organisations even after he was outed as a serial child rapist. Gerry Adams TD helped his serial rapist brother set up home in Dundalk where he had access to countless children and in particular to young children in the families off Sinn Fein members, Sinn Fein members who trusted Liam Adams as Gerry Adams had given him the stamp of approval, knowing well that his brother was a child rapist. Gerry Adams TD was parachuted into Dundalk and claimed time and again to locals that the child rape charges against Liam were part of a Brit conspiracy to undermine Gerry Adams TD. With all his bluster and lies, Gerry Adams has finally been exposed as a man prepared to do anything, including conceal the rape of children, to protect his lucrative political career.

Liam Adams has been convicted of all charges relating to the sexual abuse of his daughter Áine.

Adams was found guilty by an 11 - 1 majority verdict by the jury at Belfast Crown Court this afternoon.

Adams (58), from Bernagh Drive in west Belfast, denied 10 charges of sexual assault against his daughter Áine, now aged 40 – three of rape, three of gross indecency and four of indecent assault.


The assaults took place over a six-year period beginning in 1977 when Áine Adams was aged four. 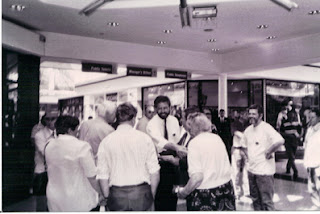 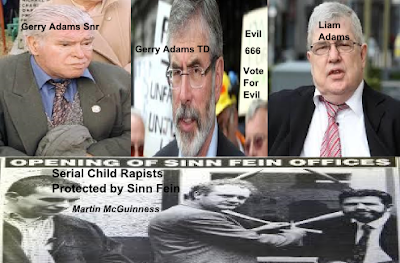 Gerry Adams Snr was also a serial child rapist, who along with other members of Sinn Fein/Provisional IRA in Belfast picked working class children up from the streets to rape them in derelict houses and sheds in west Belfast. Gerry Adams TD has admitted that he knew his Father was a serial child rapist, however, in order to protect his lucrative political career Gerry Adams TD afforded his Father a full-style PIRA funeral in west Belfast, the final insult to the many dozens of children raped by the evil Adams Family.

The claim came from prosecuting lawyer David McDowell as he closed the case against 58-year-old Liam Adams.

Mr McDowell told the Belfast Crown Court jury of nine men and three women that "the truth is king in this case".

"We suggest members of the jury that when you look at the truth, quite literally, you could not make it up," said the lawyer, adding that such was the evidence of Áine Adams, "no ordinary member of the public who has not been abused could not have come up with it."

Adams' defence QC Eilis McDermott counter claimed, however, that both Áine and her mother Sarah were proven liars whose evidence "doesn't hold water".

"The fact that the witnesses are prepared to swear by Almighty God to tell the truth, the whole truth and nothing but the truth and then lie to you [over dealings with the police], must mean in a case like this, that you cannot accept the truthfulness of any part of their evidence because it's all you have got," declared the lawyer.

Liam Adams, from Bearnagh Drive in west Belfast, is charged with ten offences including rape, indecent assault and gross indecency against his daughter more than 30 years ago on dates between March 1977 and March 1983.

He denies all charges.

His daughter 40-year-old Áine Adams has testified that between the ages of four and nine, her father raped and abused her at various addresses the family lived in - including when her mother was in hospital giving birth to her brother and when she was in bed beside her brother.

The jury have heard that although the allegations were brought to police attention in 1987, six months after a family confrontation in Buncrana, the complaint was withdrawn.

Adams' ex-wife Sarah Campbell said that was because she felt the police were more interested in her husband's activities and associates, recounting how one social worker told her the police had asked for Mrs Campbell to meet them in the city centre.

Those claims have been refuted by social workers.

The allegations were raised again in 2007 and it was then that Liam Adams was arrested and interviewed.

The jury have also heard that when initially asked about being confronted by his wife, daughter and his brother Gerry Adams, Liam Adams denied it happened.

Giving evidence on his own behalf when he repeatedly and consistently denied the allegations, Adams claimed he lied about the alleged meeting because it had been "drummed into us that we don't talk about Gerry Adams".

He labelled the allegations against him as "rubbish, absolute rubbish".

On Monday, Mr McDowell said while doubts would likely be cast on the claims for why the allegations were not pursued in the mid-1980s, he suggested to the jury that they use their "common sense".

He suggested that it would be "perfectly credible" that the police would have been interested in not just the allegations of abuse - but also had an "unhealthy interest...in big Gerry" and added that while there were no records of any social worker passing on a police message, "that's the things about off the record conversations, they're not recorded."

The truthfulness of Áine's account, said Mr McDowell, lay in the details of her evidence because if it had not happened, "how could she come up with this?"

If Áine had not been subjected to it, suggested the lawyer, "she could not have told you of the turmoil in the mind of the child."

He further declared to the jury that looking at the evidence and in applying common sense and their life experience, they would be "firmly convinced" of Adams' guilt.

During her closing remarks, Ms McDermott conceded that Adams, contrary to his solicitor's advice, had lied to police about the meeting in Buncrana, Co Donegal but that he had given his reasons for that.

"It may seem to you a good reason or a bad reason but it's his reason," said the lawyer, adding that the jury should apply their common sense when looking at that aspect of Adams' evidence.

She urged the jury to look at the evidence of the social workers who testified that no such message was ever passed onto Áine and her mother from the police, claiming their account "is just patently not right".

Describing the jury as the "supreme judges of fact," Ms McDermott told them that only two people "in the whole world" really knew what had happened - Adams and his daughter Áine.

"Look at the evidence and ask: 'Is that enough, is that enough to satisfy me beyond reasonable doubt so that I'm firmly convinced of the guilt of a person?'," said the lawyer, adding that Áine and her mother could not be relied on.

Áine's sister Sinead had given evidence, telling the jury that her father allegedly confessed to her that he had abused Áine during a reconciliation meeting in December 2002, a meeting which was followed up by regular visits before things broke down again around ten months later.

On Monday, however, Ms McDermott said that not only had Adams denied any such confession, she put to the jury that if a father had just confessed to you that he abused your sister "you would not be able to wait to get out the door....you would not go anywhere near him".

She also highlighted the fact that although the Crown say he is a "monster" - who first raped his daughter when she was around five - none of his other three daughters or any child he worked with in various youth clubs and projects had ever made a similar complaint.

"We say to you that the only proper verdicts that you can return on these counts are verdicts of not guilty," declared Ms McDermott.

Once trial judge Deputy Recorder Judge Corinne Philpott QC has directed the jury in how to apply the law to each of the charges, the jury will retire to consider their verdicts.

The jury have been told their deliberations will begin on Tuesday.

The trial continues. At hearing.
at 12:10 PM
Email ThisBlogThis!Share to TwitterShare to FacebookShare to Pinterest