Three men and two women are to stand trial accused of Provisional IRA membership more than a decade ago, a judge has ruled. 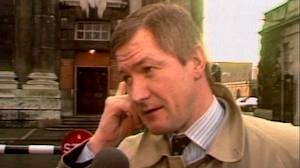 Reporting restrictions were originally imposed in the case but the Northern Ireland Courts Service has now confirmed the defendants - all from Belfast - can be named.

Wilson, 54, with an address at the Sinn Féin Advice Centre on the Falls Road, and Finucane, 56, of Hawthorn Hill, Hannahstown appeared before the city's Magistrates' Court to decide if they have a case to answer.

Alongside them were Agnes McCrory, 73, of Dermott Hill Road; Briege Wright, 56, from Glassmullin Gardens; and Martin Edward Morris, 49, with an address at Wellbeck Road in London.

It is alleged that all five belonged to a proscribed organisation, namely the Provisional IRA, on dates between 1997 and 2000.

The full details of charges in the case cannot be disclosed for legal reasons.

A preliminary investigation was due to be held to test the strength of the prosecution case.

But following private discussions it was decided to proceed with a shorter hearing.

District Judge George Conner agreed to return all five defendants for trial at Belfast Crown Court on a date to be fixed.

They were all released on £250 bail to appear again when those proceedings get underway.

A ban on publishing the defendants' identities had been lifted in October last year.

Following Monday's hearing the Courts Service initially indicated that the reporting restrictions were being reinstated until the case reaches the Crown Court.

However, a spokesman later confirmed the judge has decided against any such prohibition, provided an alleged victim connected to the case is not identified.
at 1:55 AM
Email ThisBlogThis!Share to TwitterShare to FacebookShare to Pinterest