Colin Duffy is Chief of Staff of The IRA (Irish Republican Army) and he controls The IRA by means of a tight community of former members of The Provisional IRA (PIRA – now viewed as a British controlled proxy organisation). However, simply because the PIRA was led by M16 and M15 Agents, this does not mean that many within the ranks of the PIRA were not and remain committed Irish Republicans, they had simply been misled by British Agents such as Martin McGuinness and Dennis Donaldson, but to mention two. 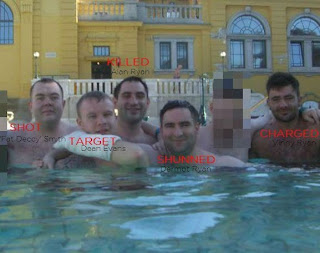 The difficulty for Colin Duffy and The IRA is that they know they have no legitimacy until such time as they purge the contempt that Sinn Fein have shown for The IRA. Duffy and many of his comrades were members of The PIRA and this means they have some guilt by association with the surrender of Irish Republicanism to the British. Duffy knows that he cannot simply walk away from his association with the Provo leadership sell-out.

Duffy cannot simply sit back and allow weapons and ammunition to be used to shot some hood in the back alley ways of Belfast and Derry, while ignoring the British Agents still active within Sinn Fein and its proxy army. The contempt shown for The IRA, its legacy and its fallen volunteers cannot be allowed to go unpunished, and someday soon Duffy must face that reality rather than simply beat his chest proclaiming republicanism.

When British sock-puppet Gerry Adams TD was parachuted into County Louth in order to run and hide from the fact that he concealed the identity of two serial child rapists, Adams meet with senior members of the then Real IRA in order to negotiate a clear run in Louth, that free run was granted, and it is this type of ‘double-speak’ from The IRA leadership that is allowing The IRA to be infiltrated by informers and agents, most notably in Belfast, Derry and Dublin.

On the 18th September 2013 MI6 Agent and former PIRA Commander Martin McGuinness, addressed an audience in Warrington, in a centre built by the peace foundation established in memory of Tim Parry and Johnathan Ball who were murdered in a PIRA bomb attack in Warrington in 1993.

McGuinness admitted to the audience that he was supposed to meet his MI6 contact on the day of the Warrington attack in 1993; the meeting was cancelled, but went ahead two days later.

The IRA/Real IRA put on a united front with a military display at Ryan’s funeral, but behind the scenes things in Dublin had already started to unravel.

Over the intervening year, Ryan’s inner circle has been seriously weakened following a massive clampdown by gardai, growing confidence of criminal gangs, drug use by many of the Dublin IRA members and the threat from power struggles within the terror organisation.

The first blow to the dissidents was dealt by gardai, who arrested 17 people in the days after Ryan’s funeral, during which a volley of shots were fired over his coffin.

Key associates, including Ryan’s younger brother Vinny and pals Nathan Kinsella and Daragh Evans, were among those to be charged with offences, including IRA membership.

Dissident sources told the The Irish Observer at the time that they had drawn up a hit-list of north Dublin criminals they were planning to take out in revenge for the killing.

The Dublin brigade of the organisation were hoping to carry on as before with Ryan’s pal ‘Fat Deccy’ Smith put forward as the new leader of the cell. However, republicans from the north saw Ryan’s death as their opportunity to take over Dublin operations.

THE murder of Alan Ryan set in motion a series of events which almost led to the implosion of the New IRA in Dublin.

Dissidents put on a united front with a military display at Ryan’s funeral, but behind the scenes things in Dublin had already started to unravel with members organising drug infested house-parties.

Over the intervening year, Ryan’s inner circle has been seriously weakened following a massive clampdown by gardai, growing confidence of criminal gangs and the threat from power struggles within the terror organisation.

The first blow to the dissidents was dealt by gardai, who arrested 17 people in the days after Ryan’s funeral, during which a volley of shots were fired over his coffin.

Key associates, including Ryan’s younger brother Vinny and pals Nathan Kinsella and Daragh Evans, were among those to be charged with offences, including IRA membership.

In November, Ryan’s pal Nathan Kinsella, who was out on bail charged with IRA membership, was kneecapped by his own associates and booted out of the organisation after they found drugs in his apartment. Other members were kicked out around the same time and an internal feud was already well underway.

In December, dissidents carried out the murder of veteran criminal Eamon Kelly near his home in Killester. Sean Connolly, who was linked to a dissident faction based on the south-side of the city, was one of several people arrested over the killing. The arrests led dissidents to believe they had at least one informer in their ranks.

Kelly was not directly involved in the killing of Ryan, but may have been seen as an easy target by dissidents. However, it has already become clear criminal gangs were not as afraid of Ryan’s cronies as they had been.

However, the dissident figures were not even staying in the family homes as they had been moving around, fearful they would be killed by the same gang who took out Ryan.

By January the internal feud within the New IRA was gathering pace and senior dissidents told the The Irish Observer they were carrying out a “root and branch” review of the organisation, saying it had become tarnished by criminality.

They told how ‘Fat Deccy’ Smith had been isolated from the organisation. A week later Smith was shot in the leg in a punishment attack.

In March, former Real IRA member Peter Butterly was shot in the car park of the Huntsman Inn at Gormanston, Co. Meath and several dissidents were arrested. They included Dean Evans, Eddie McGrath (32), from Tallaght, David Cullen (29) and Sharif Kelly (43), both from Balbriggan.

The arrests were a serious blow to the new leadership of the organisation.

They were to suffer a further blow when eight men were arrested in Clondalkin as part of an investigation into dissident activity. Kevin Braney (38), Des Christie (49), Hubert Duffy (45) and John Brock (40) were among those charged with IRA membership. Those arrested included the new Dublin leaders. At this point it was clear that The IRA in Dublin was riddled with informers.

Eamon McNamee, from Lucan, was also charged. McNamee was arrested in the wake of the shooting of ‘Fat Deccy’ Smith. His links to republicans raised eyebrows due to his serious convictions for drug dealing.

In May, Ryan associate Aidan ‘the Beast’ O’Driscoll was shot in the leg in a punishment attack in Cork.

Around this time there had been reports that Ryan’s brothers Anthony and Dermot had been shunned by the republican organisation. However, they retained support from certain factions and still attend republican marches in Derry and so forth.

Sean Connolly’s brother Ronan was shot in a punishment attack in May. Ronan is a convicted criminal and not an IRA member, and is believed to have been targeted by dissidents.

The infighting and arrests led to an emergency meeting of leaders of the 32 County Sovereignty Movement – the political wing of the New IRA – in June. After that meeting gardai arrested eight people and uncovered a massive haul of the plastic explosive Semtex in two raids in Dublin.

Seven people were arrested at a suspected IRA meeting at a house in Tallaght including Braney, Christie and Brock, who were ordered not to associate with each other following their IRA membership charge in April.

All those arrested at the Tallaght house were loyal to the new leadership trying to take over Dublin, but the arrests dealt another major blow to their attempts to take control.

On the same day as those arrests Stephen Hendrick (45), of Balbutcher Drive, Ballymun, was charged with IRA membership and possession of ammunition in suspicious circumstances on at Furry Park, Turnapin Great, Old Airport Road, Cloghran in Co Dublin.

Gardai discovered more than 15kg of Semtex explosive as well as a machine gun, at least four handguns, a couple of shotguns, a hand grenade, and a huge amount of assorted ammunition at the site.

There are some dissidents who remain standing after the arrests and infighting. Phil Forsyth, from south county Dublin, was a pal of Ryan’s and has been involved with the Real IRA since the 1990s.

He was put forward as someone to take over the Dublin operation following Ryan’s demise and was expected to attend yesterday’s march to Ryan’s grave.

Many others will no doubt attend and while they will try to put on a united front, it is clear that there is major division in republican circles at present.
at 12:17 PM
Email ThisBlogThis!Share to TwitterShare to FacebookShare to Pinterest