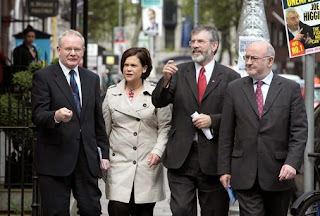 Yesterday was a bad day in the office for Sinn Fein/PIRA, how sad was it to watch Mary Who sitting between two old men in the Dail (Sleeveen O Caolain and Gerry 'They havent gone away you know' Adams, as Gerry turned from 'reformed terrorist' to victim of a Witch-hunt by In dependent Group Newspapers (and the tacit suggestion that The IT may also be engaged in that covert operation to discredit the Nobel G Adams TD). The day got no better when Newbie (Peadar Toibin TD) was out-questioned by the Dithering Vincent Browne (although it was an easy task). A public Inquiry has been muted into the 'Silence of the Lambs' campaign run by Sinn Fein/PIRA against victims of Child-Rape/Rape at the hands of Sinn Fein/PIRA members, and perhaps that will be needed, however, the reality is that the dogs on the streets know what The Sinners done to their victims, they Raped them, they tortured them, they murdered them...what more needs to be said? However, it is worth noting that as Sleeveen O'Caolain sat silently and pondered his own position, one does not have to go to Belfast to find Sinn Fein/PIRA victims who were silenced by Sinn Fein/PIRA, there are many victims sitting in Sleeveen's own constituency who were silenced by the men and women in Woolly hats...did he know about any of these cases? Oh Yes! While Cowardly Caoimhghín Ó Caoláin TD had plenty to say about his former Flat-Mate VMK when VMK was convicted of sexual assault in 2000, the Coward O’Caolain sat silent as Gerry Adams TD continued to lie through his teeth about his role in the Cover-up of the Rape of Mairia Cahill

A Fine Gael TD is to give gardaí the names of eight alleged abusers who were moved from Northern Ireland to the Republic by Sinn Féin, the Dáil was told yesterday.

During a five-hour debate in the Dáil arising from the claims of Belfast woman Maíria Cahill, Sinn Féin and its leader Gerry Adams were accused of covering up for rapists and abusers by moving them across the Border.

Taoiseach Enda Kenny, Tánaiste Joan Burton and Fianna Fáil leader Micheál Martin joined in calling on Mr Adams to tell the relevant authorities what he knows about the movement of offenders across the Border.

The debate was opened by Mr Kenny who launched a blistering attack on Mr Adams and the republican movement for its handling of the issue.

He said the IRA had “covered up abuse, moved the perpetrators around so the untouchables would remain untouchable” outside Northern Ireland.

“They thought so much of this Republic that they would honour us with their rapists, gift us their child abusers under that so-called elite republican dispensation,” he said. 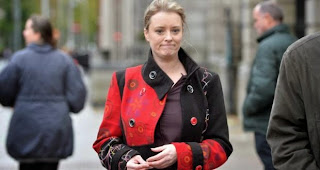 Mr Kenny said the debate was brought about by the courage of Maíria Cahill and the allegations she had made.

Tánaiste Joan Burton challenged Sinn Féin deputy leader Mary Lou McDonald to apply the same standards as she did when condemning the Catholic Church’s cover-up of sex abuse.
“In particular, does she apply this standard to the ‘powerful man’ who leads her own party?” asked Ms Burton.

Meath East TD Regina Doherty said she had the names of eight alleged abusers relocated to the Republic by Sinn Féin.

“To be honest with you, I am too afraid to name them here today,’’ she said, adding that she would give the names to the Garda.

Mr Martin told the Dáil there were as many as 28 victims of abuse by members of the Provisional IRA discussing how to have the truth of what happened to them acknowledged.

“This abuse was covered up within the movement and continues to be covered up to this day,” said Mr Martin.

He said Maíria Cahill was brave to an extent which put to shame those who had sought to deny her justice and undermine her claims.

In response Mr Adams accused the other party leaders of playing politics and using smear tactics because they feared the growing strength of Sinn Féin.

He said if he or Sinn Féin were at fault, he would accept and acknowledge that. But he said he and other republicans who spoke to Ms Cahill did so out of concern for her welfare.

In an interview with RTÉ News, Ms Cahill said she regretted that Mr Adams had an opportunity to do the right thing and did not take it.

“I think that is pretty despicable,” said Ms Cahill, who added that she found it “deeply ironic and hugely upsetting” that Mr Adams, who told the Dáil he hoped she achieved justice, was the leader of the movement that denied her justice.

She also said she believed there were more than the 28 victims of abuse referred to by Mr Martin and said the number of perpetrators was now well into double figures.