A man accused of storing explosives at his west Belfast home is believed to be "deeply involved" with a dissident republican organisation, a court has heard.

Police claimed Louis McKenna was trusted to keep a substantial amount of suspected pipe bomb parts, a pistol and bullets. 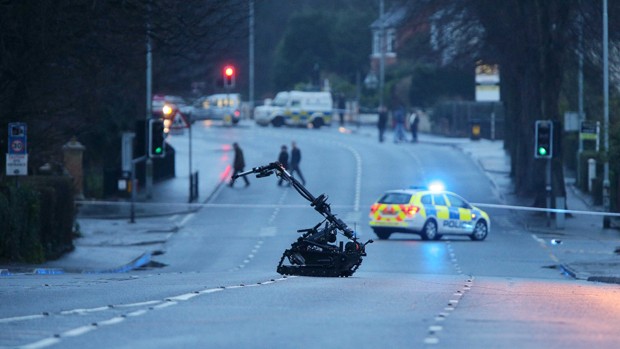 McKenna, 52, was arrested after searches were carried out at his Forest Street address on Saturday.

He appeared before Belfast Magistrates' Court on Tuesday on charges of possessing a firearm, assorted ammunition and improvised explosive device (IED) components in suspicious circumstances.

Bail was refused due to the risk of re-offending or interfering with witnesses.

The accused, described by his lawyer as a chronic alcoholic with serious health problems, entered the dock on a crutch.

Asked if he understood the charges which are denied, he replied: "yeah."

A detective constable opposed bail by claiming he may flee, try to speak to others who visited his home or commit other offences.

He told the court: "Police believe the defendant is deeply involved in the activities of a dissident republican organisation to the extent that he is trusted to store a substantial amount of IED component parts, a firearm and ammunition which presents a serious risk of loss of life."

The detective added: "The current threat posed by dissidents is classified as severe."

During police interviews McKenna denied knowing anything about the gun and explosives, the court heard.

He was said to have provided the names of others who frequent the rental property he moved into last August.

Defence solicitor Sean McCann claimed the weapon and a magazine found above the kitchen area were in a burnt condition.

A shotgun pellet seized during the raid was also covered in rust, according to the lawyer.

He argued that the condition of the haul indicated it could have been stored there long before his client took over the tenancy.

Cross-examining the detective, Mr McCann asked: "Is there any indication that he (McKenna) ever supported, marched, published or showed any outward sign that he would be in favour of a violent political organisation?"

The officer replied that he was not aware of any such information.

District Judge Fiona Bagnall also heard details of the accused's bouts of serious ill-health, including having a tin plate inserted in his leg after a fall.

McKenna's sister gave evidence as part of efforts to secure his release, imploring the judge: "Just look at my brother. My brother wouldn't hurt a fly."

But refusing bail, Mrs Bagnall cited the potential for re-offending and interference with witnesses.

She remanded McKenna in custody to appear again by video-link on 24 February.

As he was being led from the dock he waved at a large gathering of family and friends in the public gallery.
at 2:44 AM
Email ThisBlogThis!Share to TwitterShare to FacebookShare to Pinterest