Damien "Dee" Fennell, 33, from Duneden Park in the Ardoyne area of North Belfast, is also accused of inviting support for a proscribed organisation. 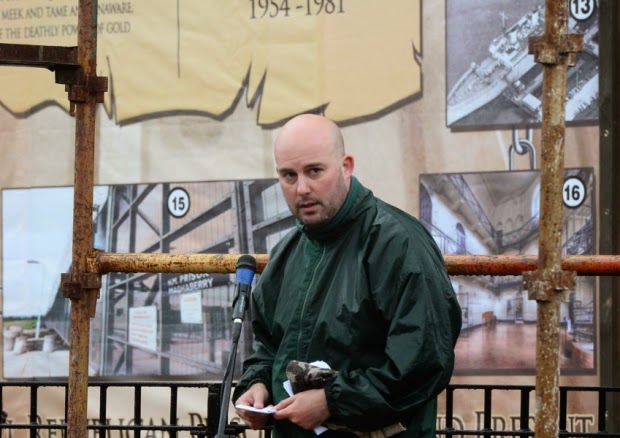 The charges are connected to a speech he gave during a 1916 commemoration event at St Colman's graveyard in Lurgan, Co Armagh on Easter Sunday.

In the address, which was recorded and posted online, Fennell described armed struggle against British rule as "legitimate".

There was a significant police presence both inside and outside as Fennell, who was wearing a grey hooded top and navy shorts, was taken in to the dock at Craigavon Magistrates Court.

He stood with his arms folded and spoke twice to confirm his identity and that he understood the charges against him.

Fennell, who is also a spokesman for the hardline Greater Ardoyne Residents Collective which opposes Orange Order marches and Sinn Fein, appeared relaxed and waved at a crowd of about 40 supporters who had packed the public gallery for the brief hearing.

A Police Service of Northern Ireland (PSNI) detective sergeant told the court he believed he could connect the accused to the charges.

Defence solicitor Peter Corrigan said there was no application for bail but that one would be made at a later date. He also claimed his client was in receipt of State benefits and made an application for legal aid.

Remanding Fennell into custody District Judge Mervyn Bates said: "You are remanded by this court, there being no application for bail."

The crowd of men and women supporters, who had refused to stand as the judge entered the courtroom, was ordered to be silent after they erupted into applause and cheers as Fennell was taken out of the courtroom.

One man shouted "All right Dee." Outside they unfurled a banner reading End British Internment. Fennell is due to appear in court again via videolink on May 1.
at 10:33 AM
Email ThisBlogThis!Share to TwitterShare to FacebookShare to Pinterest