Three men have been arrested in Co Donegal in the wake of an attempted bomb attack in Northern Ireland.

A bomb, which police said was capable of cause "death or serious injury" was found beneath the car of a serving PSNI officer in Derry.

The bomb was left at Glenrandel in the village of Eglinton on the outskirts of Derry city.

he men, aged in their late 20s and late 30s, were detained in Ballybofey at around 4am after their car was stopped by the Northern Regional Support Unit.

A forensic examination of the car is under way and searches are continuing in the area where the car was stopped.

The three men being held at Garda stations in Letterkenny and Milford.

PSNI local district commander superintendent Mark McEwan condemned those responsible.
"Police were alerted to suspicious activity outside a house at around 2.45am this morning," he said.

"Upon attending the scene a device was located under a car parked outside the house.
"ATO (Army Technical Officers) were tasked to the scene during the early hours and have now declared this to be a viable device." 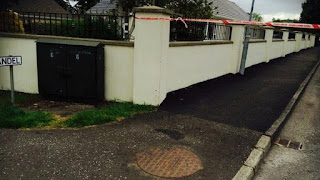 at 4:02 PM
Email ThisBlogThis!Share to TwitterShare to FacebookShare to Pinterest