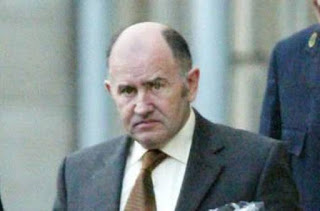 While Michael McKevitt must take full responsibility for his imprisonment, there is no doubt that The State took full advantage of the opportunity to put McKevitt away for a very long time, and this view was quietly supported by the British Agents within Sinn Fein/PIRA.

Whatever, the circumstances of McKevitt’s imprisonment, whatever the motivations, the fact remains that all prisoners are entitled under international law to be afforded Human Dignity, and that means not subjecting prisoners to inhumane and degrading treatment.

Michael McKevitt has recently under-gone major surgery for a cancer related illness, and anyone who has had a relative or friend suffer from cancer will know that rest following surgery is essential to the recovery process, it is therefore essential that Michael McKevitt is not subjected to inhuman and degrading treatment and is allowed to benefit from his legally entitled early release programme at the earliest opportunity.

The Irish Government were able to allow the Sinn Fein/PIRA killers of Garda McCabe early release in order to assist Sinn Fein/PIRA with the sell-out of Irish Republicanism, it is therefore fair and reasonable to ask that a man recovering from major surgery relating to cancer should be afforded Human Dignity, however, it is interesting that Sinn Fein/PIRA TDs are not among those lobbying for McKevitt’s release.

Minister for Justice Frances Fitzgerald has said that Real IRA leader Michael McKevitt is set to begin an ongoing programme of temporary releases within weeks to prepare him for his full release from prison next year after a u-turn on the issue.

The 65-year-old is nearing the end of a 20-year sentence and is now scheduled to enjoy a first short period of temporary release, likely for a weekend, by the end of the month.

A spokesman for Ms Fitzgerald said: “It is not the policy nor would it be appropriate for the Department to make any comment regarding the detail of the management of any individual prisoner’s sentence.”

The family of the jailed dissident republican leader received the support of five TDs, including former Fianna Fáil minister Éamon Ó Cuív, in lobbying for him to be released while recovering from recent surgery.

Stephen McKevitt, the jailed man’s eldest son, said while his father was still not being released from Portlaoise Prison for a prolonged period to recover from having a cancerous kidney removed, the family welcomed the reinstatement of his pre-release programme, which is not linked to his illness.

“After our campaign began to gain some momentum which included the support of a number of TDs, Francis Fitzgerald reinstated the pre-release programme without explanation,” he said of the decision taken last Friday.

“My family is seeking clarity as to why the pre-release programme was revoked in the first place, then reinstated within days and most importantly why my father was returned to prison without even a basic medical assessment.”

McKevitt Snr, who was one of four men found liable for the 1998 Omagh bombing in a civil action taken by relatives of the dead, is serving 20 years for directing terrorism and was also convicted of membership of an illegal organisation.

He was returned to prison last month 5½ weeks after surgery to have a cancerous kidney removed.

His family said last week they believed he needed up to three month’s recovery at home. They added his being returned to prison on June 22 came with no warning after three months of release on health grounds and was a political decision rather than a medical one.

They also said that a pre-release programme agreed for him from the present time to the expiry of his sentence next Easter had been cancelled without explanation at the same time he was returned to jail the week before last.

While the Dundalk man is serving 20 years, he will be freed after 15 years as he is entitled to 25 per cent remission. He has served 14½ years, with his full sentence set to expire around Easter.
at 2:28 AM
Email ThisBlogThis!Share to TwitterShare to FacebookShare to Pinterest