Whatever political or social views are held by any citizen, no citizen should be content when false allegations of sexual crime are used against any individual for any reason. Garda Maurice McCabe was branded a sex criminal by the most senior member of An Garda Sochana, when no evidence ever existed to support such vexatious and malicious claims. 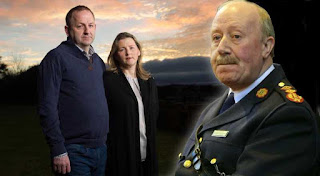 Each and every day false allegations of sexual crime are leveled against good people and in many cases these false allegations have led to people being convicted before the Courts and even The Court of Appeal has been fooled by well scholared liars and corrupt Gardai.

Those who are hurt most by these political conspiracies are the real and actual victims of sexual crime, victims whose assertions will be more and more questioned as the public lose faith in a system that allows good people to be destroyed by people pursuing personal or political vendetta’s.

Mr Charleton: Maurice McCabe was ‘repulsively denigrated’ for being no more than a good citizen and police officer

The Charleton Tribunal has found that the then Garda Commissioner Martin Callinan told a Dáil deputy in early 2014 that whistle-blower Sgt Maurice McCabe had sexually abused his own family.

In a report published on Thursday, Mr Justice Peter Charleton said he accepted what the former head of the Public Accounts Committee, John McGuinness, said in evidence of a meeting in a car park in West Dublin.

Mr Callinan, in his evidence to the tribunal, disputed the Fianna Fáil deputy’s evidence about what was said in the meeting.

The finding is a devastating finding for a former head of the police force. The abuse claim against Mr McCabe was completely without foundation.

Mr McGuinness told the tribunal that the then commissioner said to him that there were issues to do with Sgt McCabe, who at the time was being considered as a potential witness to the Dáil committee.

Mr McGuinness said he was told the sergeant “had sexually abused his family and an individual, that he was not to be trusted, that I had made a grave error in relation to the Public Accounts Committee and the hearings because of this, and that I would find myself in serious trouble.”

Mr Callinan, in his evidence said he did not at any point “speak in derogatory terms of Sgt McCabe nor would I.”

He also said that Nóirín O’Sullivan, who succeeded Mr Callinan as commissioner, had said she had no knowledge of the car park meeting. “There is nothing to show otherwise.”

Mr Justice Charleton said that, at the time, Mr Callinan felt a “frontal assault” was needed to stop Sgt McCabe appearing before the committee.

“That involved, regrettably, a pretence that Maurice McCabe was not only unreliable but that reliance on him would be a trap, the springing of which, through him being charged with one or multiple sexual abuse allegations, would leave deputy McGuinness looking more than foolish.”

The tribunal has also found that the former head of the Garda Press Office, Supt Dave Taylor, was involved in a campaign of “calumny” against Sgt McCabe and rejected Supt Taylor’s claim that he was acting under orders.

“The tribunal is convinced that he pursued a scheme that somehow evolved out of his cheek-by-jowl working relationship with Commissioner Callinan.

“Their plan was that there was to be much nodding and winking and references to a historic claim of sexual abuse”, the judge said.

During the tribunal evidence was heard that in 2006 Sgt McCabe was the subject of a claim of historic child sex abuse but that the claim was dismissed by the Director of Public Prosecutions.

Mr Justice Charleton said that Supt Taylor was a witness whose “credibility was completely undermined by his own bitterness”.

Mr Justice Charleton said he accepted the evidence given by the Security and Crime editor of The Irish Times, Conor Lally, who rejected a claim by Supt Taylor that he had been briefed negatively about Sgt McCabe.

In his report, the Supreme Court judge said of Sgt McCabe: “What has been unnerving about more than 100 days of hearings in this tribunal is that a person who stood up for better standards in our national police force, Sergeant Maurice McCabe, and who exemplified hard work in his own calling, was repulsively denigrated for being no more than a good citizen and police officer.”

In investigating the calumny against him, other aspects of our national life have been laid bare, the judge said.

The tribunal has not supported a claim that Ms O’Sullivan treated Sgt McCabe unfairly during the confidential hearings of the O’Higgins Commission, a claim that led to calls for her resignation during 2016.

Mr Justice Charleton said there was a “rush to judgment” in the public mind when selected leaked information from the commission hearings came into the public domain.

The tribunal also rejected the claim that a report broadcast on RTÉ by crime correspondent Paul Reynolds in May, 2016, had “branded” Sgt McCabe “a liar and irresponsible”.

Sgt McCabe believed that the RTÉ report was based on briefing material prepared by the Garda and used by former Garda commissioner Ms O’Sullivan to influence or attempt to influence RTÉ’s report.

However, these allegations are not upheld by Mr Justice Charleton in his report.

“While there was a reference (in Paul Reynolds’ report) to an untruth told by Maurice McCabe to the O’Higgins Commission, there can be no criticism for reporting that,” Mr Justice Charleton writes.

“Furthermore, a reference in the relevant term of reference, (k), to Maurice McCabe being branded as irresponsible is inaccurate. What Paul Reynolds did was honest.