A dissident republican who was convicted yesterday of trying to kill a policeman in 2015 was previously linked to the killing of prison officer David Black.

Sean McVeigh (38), of Victoria Street in Lurgan, was yesterday found guilty of placing a bomb under the car of the officer outside his home in Eglinton in June 2015.

He had denied the attempted murder and possession of the under vehicle improvised explosive device during a non-jury trial at Belfast Crown Court.

In court yesterday Judge Stephen Fowler QC said he was "satisfied beyond a reasonable doubt" that McVeigh was the man who planted the device under the PSNI officer's car.

It has now emerged that in 2014 McVeigh was charged with the murder of Mr Black, who was shot dead on the M1 in November 2012 as he made his way to work at the high security Maghaberry Prison.

The 52-year-old father-of-two was the first prison officer in to be murdered in almost 20 years and the killing was claimed by the New IRA. 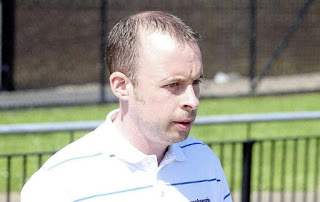 As well as murder, McVeigh was also charged with possessing an assault rifle with the intent to endanger life. However, the charges were dropped by the Public Prosecution Service.

After walking free from Craigavon Magistrates Court in July 2014, McVeigh signalled his intention to sue the PPS and PSNI for the time he had spent in custody.

But less than a year later the dissident republican targeted the police officer in Eglinton
The target's wife, also a police officer, told detectives that she was asleep, but woke up and looked out of her bedroom window.

Now retired from the PSNI, she spoke of her "sheer disbelief" at seeing a "skinny man" attaching to her husband's car what turned out to be a new type of improvised under-car explosive device.

She said that she was "so shocked" she rapped so hard on her bedroom window that she bruised her knuckles.

The court heard she immediately rang police and call handlers at Maydown PSNI despatched three response vehicles to the scene.

Officers said they spotted two cars "travelling in convoy" from the Waterside.

The two vehicles were subsequently identified from automatic number plate recognition technology and CCTV cameras as a black Volkswagen Passat and a Toyota Verso, both with Republic of Ireland registrations, both of which had been stolen.

The court also heard evidence from a number of police officers who said they spotted two cars "travelling in convoy" from the Waterside towards the cityside of Derry. As a result, police at PSNI Maydown alerted colleagues in An Garda Siochana based in Letterkenny. The vehicles travelled to Lifford, where the Toyota was abandoned.

The trial heard that as the Passat drove towards Ballybofey, Co Donegal, it was spotted by a specialist Garda armed response unit, who gave chase, stopping the car about a mile outside the village of Killygordon.

Along with the driver and a rear seat passenger, McVeigh was found sitting in the front passenger seat.

In a follow-up search of the route taken by the Passat Garda found three pairs of Tesco Marigold-type gloves, later found to have traces of explosives residue.

Further traces of RDX were found on swabs taken from the front seat of the VW car, the interior door handles and from the rear seat.

Similar explosive traces were found on the Toyota car, located six days later in the car park where it had been left that night.

Following his arrest under Section 30 of the Republic's Offences Against the State Act, the court heard McVeigh gave his name and date of birth, but refused to answer any Garda questions.

He was subsequently released on bail by Garda detectives. The trial heard that McVeigh was finally arrested over the murder bid in Eglinton by PSNI detectives on a Lurgan-bound train in May 2016.

The judge rejected defence arguments that traces of RDX explosives found on McVeigh's clothing were from an "innocent contamination".

Judge Fowler said he also drew an inference from McVeigh's refusal to give evidence at his trial and said he was satisfied the defendant was a front seat passenger in the car which took him to and from the scene of the planned attack.

He also rejected defence submissions that the device was not capable of detonation and could have been an elaborate hoax.

The trial judge said it was a fully functioning device, containing 322 grammes of Semtex explosives, with RDX being the main component.

Contained inside a black box, measuring 20cms by 15 cms by 20cms, the device was equipped with detonator, battery, circuit board, timer unit, mercury tilt switch, two toggles and a copper cone.

The copper cone was designed so that "on detonation it was deformed by the blast into a 'slug' or rod-shaped projectile".

A subsequent field test on a model of car similar to that driven by the policeman "showed that anyone sitting on the driving seat would have sustained serious and possibly fatal injuries".

Judge Fowler said: "I am satisfied beyond reasonable doubt that this was a viable device.

"I am also satisfied beyond a reasonable doubt that this device was constructed and planted under the car with the intent to kill the driver once the vehicle was moved.

"I find the defendant guilty on both counts."

Judge Fowler remanded the defendant into custody and McVeigh will be sentenced on a date to be fixed.
at 11:33 AM
Email ThisBlogThis!Share to TwitterShare to FacebookShare to Pinterest