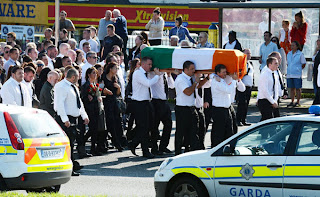 A strong Garda presence was evident outside the Church of the Holy Trinity in Donaghmede, north Dublin, where the service took place.

It was attended by a large group of mourners. A small number of masked men and women, dressed in paramilitary-style clothing, also attended.

Ryan was shot dead in a gangland style attack at Grange Lodge Avenue in Clongriffin, on Monday, close to his home. Two gunmen where involved in the killing.

A man with Ryan at the time was wounded in the legs. However, he is expected to make a full recovery.
At the time of his death Ryan was on bail awaiting serious criminal charges arising from an alleged extortion racket he was involved in.

He had allegedly threatened some pub owners in the city to close their premises and was accused of extorting money from others.

Mr Ryan was also linked to the private security sector and in recent years had control of contracts for the supply of security staff to some pubs and clubs in Dublin.

He and his Real IRA associates had also become involved in feuding with a number of major crime gangs from the city from whom they were trying to extort money.

When drug dealer Sean Winters (41) was shot dead in Portmarnock, north Dublin, in September 2010, Mr Ryan and his associates emerged as the chief suspects.

Members of the gang were also suspected of having shot dead drugs gang leader Michael Kelly (30) in Coolock in September 2011.

In 1999, when he was aged 19 years, Mr Ryan was arrested at a Real IRA firearms training camp in Stamullen, Co Meath. He was one of three young men who were later convicted of receiving firearms training from three older republicans at a disused cellar in the ruins of Herbertstown House.

The derelict property was under surveillance by gardaí when the men arrived for training. Detectives found an assault rifle, a sub-machine gun and a semi-automatic pistol in the cellar.

All six were convicted at the Special Criminal Court in 2001, with Mr Ryan jailed for four years. While he had no convictions at the time of his arrest in 1999, he had been caught in possession of a loaded revolver at his home in September 1998 and was on bail awaiting trial when arrested at the Stamullen firearms training exercise.

By the time he was jailed for four years in relation to the Stamullen incident, he was already serving a three-year sentence for being caught with the gun in 1998. The sentences were ordered to run consecutively, meaning he was effectively jailed for seven years
at 1:09 PM
Email ThisBlogThis!Share to TwitterShare to FacebookShare to Pinterest