The sniper who killed the last British Army victim of the Troubles shot by the IRA has died at his home, reportedly of natural causes. Bernard McGinn was the infamous IRA sniper who shot Lance Bombardier Stephen Restorick dead in Bessbrook in February 1997. 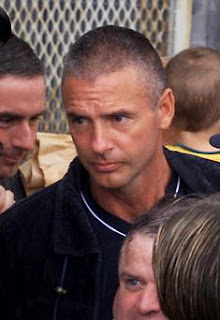 When arrested McGinn turned informer and gave information on the South Armagh IRA leading to the arrests of many significant IRA activists, McGinn, unlike other informers was not executed by the IRA as he was brother-in-law to Sinn Fein TD Caoimhghín Ó Caoláin.

The South Armagh sniper was one of the most feared figures of The Troubles, shooting down soldiers from as far away as half a mile. He became a folk hero in Republican circles while derided by others.

McGinn was 56 when he was found dead at his home in Monaghan town on Saturday.

Police say it is thought he died of natural causes with a post mortem due to be held on Monday.

An IRA volunteer at the age of 15, McGinn was the son of a local Sinn Fein councillor and the brother-in-law of current Sinn Fein deputy and Health spokesman Caoimhghín Ó Caoláin, O’Caolain married Briege McGinn.

McGinn was a member of one of two IRA sniper teams which used the deadly Barrett 50 M90 calibre sniper rifle.

The rifle was used to kill a total of nine members of the British Army including Restorick who was gunned down as he chatted to a Catholic woman in Bessbrook in 1997.

McGinn was apprehended by British Army SAS operatives at a farm near Crossmaglen on 10 April 1997.

He confessed to his role in the IRA bombing campaign involving attacks in Northern Ireland and England.

He implicated more than twenty members of the IRA’s South Armagh Brigade in his evidence and was sentenced to a total of 490 years in 1999 for 34 separate offences, however, this was a smoke screen a she would be released under the terms of the 1998 GFA.

They included his involvement in the 1992 bombing of the Baltic Exchange and the 1996 South Quay bombing, and the bombing of Hammersmith Bridge later the same year.

McGinn was released in 2000 under the Good Friday Agreement.

at 4:21 AM
Email ThisBlogThis!Share to TwitterShare to FacebookShare to Pinterest