“Earlier today the Irish people had to bear witness to yet another shameful act of state collaboration at the highest levels with the imperial elite of England’s establishment. 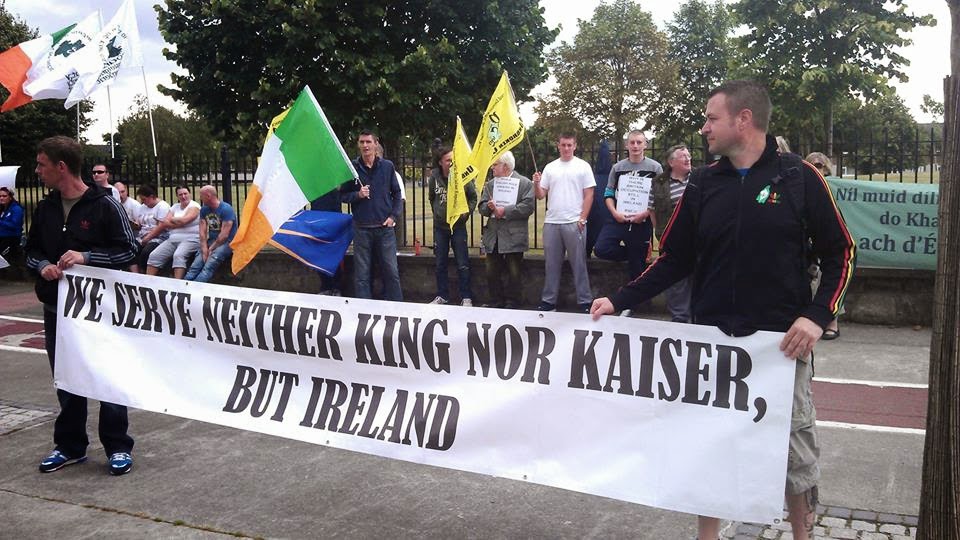 Republicans gathered outside Glasnevin cemetery at 11:30am to show their anger and disgust towards this collaboration.  For those who may not understand our opposition, for those who say have we not all moved on.  Here is but one reason, ninety miles from Dublin town young Irishmen are being strip searched and beaten on a daily bases in England’s Maghaberry Prison. In a recent communication from the Jail one POW described how the abuse upon entering and leaving the cells for court visits etc as “close to rape.”

Amid this sadistic practice to try and break the wills of Irishmen who will not accept the British Government in Ireland we have this collaboration with Britain from the 26-County State which claims to represent all Irish people. Prince Edward, the Duke of Kent was the most high profile guest with the 26-County President Michael D. Higgins being his sponsor. None of what was said in that collaborative ceremony needs to be repeated.

Republican Sinn Féin has a direct message for those who prop up and collaborate with British imperialism in Ireland. We have not gone away. Today on RTÉ 1 television as this shameful spectacle was aired live, the people of Ireland could hear voices of protest from those who will neither be purchased nor intimidated.

Our message to the people of Ireland is we understand the enormity of the task at hand, there is no undermining the determination of the Free State to destroy the legacy of 1916, after all in the past this state has murdered Irish Republicans on behalf of Britain, indeed under oath to the crown, but we will not be intimidated.

It is the task of Republican Sinn Féin to provide solid political leadership in opposing future events such as those witnessed today. To this end we call on the people of Ireland, who believe in what our martyrs of all generations who suffered for Irish freedom believed in, to work with us. Email, write or even call anonymously Republican Sinn Féin and inform us of any events of collaboration coming up in your area, all must be opposed. Until the day Ireland is a nation free from British interference we will oppose all acts of collaboration and claims of sovereignty in any part of Ireland by all sections of Britain’s apparatus.

Finally as our Republican comrades stood facing off the frontline defence of British Royalty, the Garda Síochána, the Union Jack was duly burnt by members of Republican Sinn Féin in a symbolic act of resistance. One of our members was arrested, taken straight to court and charged for a public order offence. This followed the earlier arrest of a young Dublin Republican who was harassed by members of the Gardaí for walking in Glasnevin Cemetery. During the course of the protest a fifteen year old member of Na Fianna Éireann was among those who were sprayed in the eyes with Mace by the Gardaí.”


Confirmation: 089 201 8163
at 12:47 AM
Email ThisBlogThis!Share to TwitterShare to FacebookShare to Pinterest