Mr McGuigan Sr was shot dead at his home in east Belfast last month, and police said members of the Provisional IRA were involved in the killing. 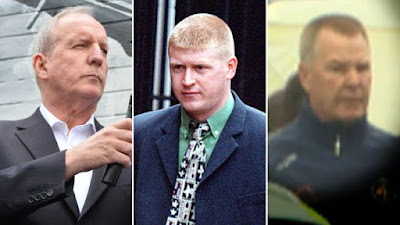 The other two arrested, Eddie Copeland and Brian Gillen, are also well-known republicans.
Mr Storey, a former PIRA prisoner, is the northern chairman of Sinn Féin.

In 2005, Ulster Unionist Party (UUP) MP David Burnside told the House of Commons under parliamentary privilege that Mr Storey was the head of intelligence for the PIRA.

Mr Storey is a close ally of Sinn Féin President Gerry Adams TD and has an office at Stormont.

MI6 Agent Martin McGuinness (see NOTE below) said he was "surprised" to learn about Mr Storey's arrest, however, this is highly unlikely and actually suggests that the arrests may be a smoke-screen to suggest that Sinn Fein/PIRA are actually being policed and not protected by The British Security Services.

"He has played a leading role in the development of Sinn Féin/PIRA’s peace strategy and is a long-standing and loyal supporter, defender and advocate of the peace and political processes.

"We look forward with confidence to his early release."

But he added there was no evidence at that stage that the killing had been sanctioned at a senior level of the organisation. However, Mr Hamilton has now directed the arrest of one of the PIRA’s most senior terrorists.

Sinn Féin said the PIRA no longer exists after it ordered an end to its armed campaign in 2005, however, Sinn Fein/PIRA have murdered over 40 Catholics since their agreed MI6 ‘cease-fire’ in 1994.

A total of 16 people have been arrested in connection with Mr McGuigan Sr's murder.

One person has been charged, while the others were released unconditionally.

After Wednesday's arrests, First Minister Peter Robinson tweeted: "These events were predicted in my statement on Monday.

"No-one can be above the law. That is why we sought adjournment of the assembly.

"We will do so again. Hopefully the UUP will support us this time, rather than voting with Sinn Féin for business as usual," he added.

UUP leader Mike Nesbitt said the "political implications could not be more serious and profound".

He said his MPs would meet Prime Minister David Cameron on Wednesday to discuss the arrests.

"That is how serious it is being treated in Downing Street," he added.

The UUP leader said he had no prior knowledge that the arrests were going to be made, but said he had been "given to believe that the situation could become blacker".

In 2001, Mr Robinson told the House of Commons that Mr Gillen was a member of the IRA's ruling army council.

Mr Copeland is a leading republican from north Belfast.

In 1994, former UUP leader David Trimble used parliamentary privilege in the House of Commons to describe him as an IRA godfather.

A year earlier, he was seriously injured when he was shot by a soldier, and has survived a number of attempts on his life by loyalist paramilitaries.

The three men are being questioned at Antrim police station.

The murder of Mr McGuigan Sr sparked a crisis in Northern Ireland's power-sharing government after the police assessment of IRA involvement.

The UUP said Sinn Féin's denial that the IRA existed made it "impossible to do business with them" and subsequently left the Northern Ireland Executive.

The Democratic Unionist Party said there would be no more meetings of the executive unless in "exceptional circumstances".


A fresh round of talks between the main political parties got under way on Tuesday.

Police were prevented from questioning deputy First Minister Martin McGuinness about the 1987 Poppy Day bombing, a Westminster committee has heard.

The claim was brought to an inquiry focusing on the matter of compensation for victims of Libyan-sponsored IRA attacks, which began on Wednesday.

Its the first public evidence session into the role of the UK Government in seeking the compensation and is led by the cross-party Northern Ireland Affairs Committee.

The former Muammar Gaddafi regime provided the plastic explosive Semtex and other weapons to the IRA during the Troubles.

Kenny Donaldson, spokesman for the Innocent Victims United (IVU) group, said Libya used the IRA Enniskillen bomb as a way of waging war against the UK with the republican organisation.

The Committee heard the Northern Ireland Office advised a senior former Historical Enquiries Team investigator it "would not be a good idea" to question McGuinness on the atrocity.
at 12:54 AM
Email ThisBlogThis!Share to TwitterShare to FacebookShare to Pinterest