In the early 1980s, two significant events took place that would shape the direction of Sinn Fein/PIRA in the 21st Century, the first major event was the Hunger Strikes of 1980/81, from these hunger strikes, be it deliberate or not, Sinn Fein/PIRA found a new electoral platform on which to sell their wares. The second most important event was the Super-grass trials, while many look back on the Super-grass trials and describe them as another British Security failure, the fact was, that this form of selective internment allowed The British Security Services to place many of their most important agents within the ranks of Sinn Fein/PIRA (and the INLA to a lesser degree). 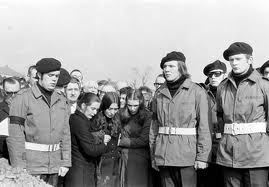 What would not be widely known among the general public is the fact that when a member of The PIRA is imprisoned, his/her Rank is lost in the outside world, and while they may take on a new rank within the prison system, they are replaced on the outside, this system allowed the British to have their lower ranking agents promoted within Sinn Fein/PIRA, this was the key focus of the RUC/MI5, while MI6 focused all their energies on Sinn Fein/PIRA leadership personnel. 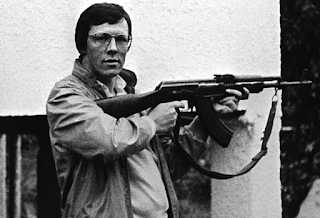 By the mid-1980s Sinn Fein/PIRA had been infiltrated at every level, with most of the top players meeting with individual MI6/MI5 Officers, while lower ranking personnel were being Handled by RUC Special Branch and MI5 to a lesser degree. 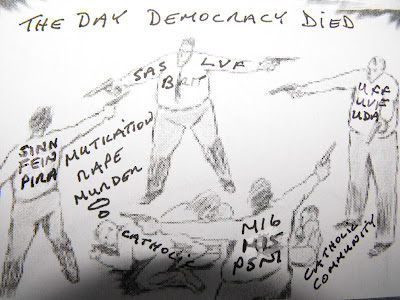 Those members of Sinn Fein/PIRA who were viewed as difficult were set up for imprisonment or summarily executed by the SAS, this murderous focus was directed mainly at Sinn Fein/PIRA operatives in the ‘border’ counties that were under the control of PIRA Chief of Staff, Kevin McKenna, McKenna was at best viewed as un-helpful.

This wholesale slaughter of Sinn Fein/PIRA activists in the ‘border’ counties, would be coupled with a British normalisation policy in the north, this meant that RUC and UDR Officers would be placed in the front line against uncompromising Sinn Fein/PIRA activists, this meant that less Body-Bags would be returning to England and the bad publicity that went with all of that for serving British Governments.

By 1994 Sinn Fein/PIRA were on their knees, MI6 was effectively controlling the majority of The Northern Command including Martin McGuinness MP, any Sinn Fein/PIRA operatives who had not been compromised (these were few – particularly in Belfast and Derry) were constantly frustrated as their operations were compromised by their senior officers, who were British Agents.

During the process of Sinn Fein/PIRA surrender to their MI6 Handlers, Sinn Fein/PIRA consistently outlined their concerns for their authority in Catholic areas, Gerry Adams TD and Martin McGuinness MP told their British Handlers that they would need to maintain an arsenal of weapons to deal with any dissent in the Catholic community. MI6 agreed that Sinn Fein/PIRA should be allowed to act as British Auxiliaries in order to suppress any Catholic opposition to British Rule in the north.

MI6 were told by Martin McGuinness MP in 1994 that as well as holding on to clean weapons already in their (Sinn Fein/PIRA) possession from the importations from Colonel Gaddafi in the mid-1980s, Sinn Fein/PIRA had also sourced up to 400 automatic hand-guns from the USA that would be delivered by post. MI6 ensured that these weapons from the USA which were sent by a Florida based Stock Broker, Mike Logan, arrived with Sinn Fein/PIRA without interference from the authorities. Logan, who is third-generation Irish, started sending weapons to Sinn Fein/PIRA in 1995.  He worked directly for Spike Murray, the head of the IRA’s Northern Command.

When the Sinn Fein/PIRA leadership announced their agreed MI6 cease-fire in August 1994, many ground level Sinn Fein/PIRA activists were surprised, even The PIRA Chief of Staff Kevin McKenna had been left outside the loop with the actual cease-fire declaration. However, it would soon become clear that people such as McKenna had been left out of the loop about many significant matters including the decommissioning of PIRA weapons. Martin McGuinness tried to back-step on the decommissioning issue, however, his lies were quickly exposed when some of the communications between McGuinness and his MI6 Handler Michael Oatley were captured by a PIRA Intelligence Officer and leaked to the media.

A few months of lies and half-truths would continue between the Sinn Fein/PIRA leadership and their ‘loyal’ followers, eventually leading to McKenna and McKevitt resigning from the PIRA Army Council. Sinn Fein/PIRA would now work hard trying to create distractions for their ‘loyal’ followers, we had the opening of the border roads, the release of prisoners, the dismantling of British Army installations, calls for disbanding the RUC, disbanding the UDR, with the most occupying tactic being opposition to Orange Parades.

All the while Sinn Fein/PIRA had continued to act as British Auxiliaries by ordering the murder of anyone who stood in their way or tried to undermine their authority, Drug Dealers who refused to pay protection money to the cease-fire soldiers were shot dead, men who stood up to individual PIRA members were shot dead, political opponents including members of the SDLP were subject to regular attack. In 2000 Sinn Fein/PIRA carried out the murder of life-long republican Joe O’Connor as Mr O’Connor had spoken out about Sinn Fein/PIRA playing the role of British Auxiliaries to the RUC. All of the weapons used in these murders, including the murder of Kevin McGuigan, had been imported with the consent of MI6 and Sinn Fein/PIRA had been allowed to retain these weapons with the nodded approval of The British and Irish Governments.

The truth about the British approach to Sinn Fein/PIRA’s continued murderous campaign against the Catholic community would come in 1999, when then British Secretary of State Mo Mowlam would describe the murder of Catholics by Sinn Fein/PIRA as “Internal House-keeping”, Sinn Fein/PIRA have now murdered over 40 Irish Catholics since their agreed cease-fire in 1994, this has included the cold blooded murder of Garda Gerry McCabe and the most recent murder of Kevin McGuigan in Belfast.

When the Secretary of State for the north Theresa Villers meets with the Irish Minister for Justice, Frances Fitzgerald this week, we can expect more of the same, Villers will have her statement and protocol prepared by MI6 (who will protect Adams and McGuinness at any cost) and Frances Fitzgerald is unlikely to digress from the script.

We can expect yet another smoke screen to be created in order to keep the Provos in business, we will have talk about assessments, a new body to overlook PIRA activity, we will have politicians silenced by Sinn Fein/PIRA legal letters threatening ‘proceedings’ for words uttered, and we will be back to ‘politics’ as normal. Sinn Fein/PIRA members will continue to murder, rape, smuggle, racketeer, drug deal and the rest, so, business as normal as the “Internal House-keeping” thesis takes prominence over democracy and civil society.

at 8:18 AM
Email ThisBlogThis!Share to TwitterShare to FacebookShare to Pinterest