Ex-Assistant Chief Constable Alan McQuillan has said the munitions found buried at Capanagh Wood near Larne are a “very rare” find and he could not recall seeing more than one or two of the anti-personnel mines in his entire police career. 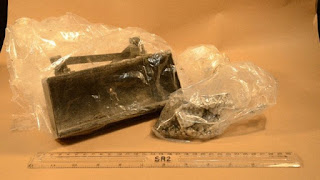 “They are designed that when they go off they fire ball bearings at extremely high speed and they’ll kill anyone within a radius of 100m, so these are horrific weapons and if you are deploying those in an urban environment, the risk not only to police officers but to the public is terrible,” he commented.

“It’s really bad to see that type of weapon here. It’s designed to take out large swathes of troops so it’s a really deadly weapon.”

Also stashed in the barrels buried in the ground was an Armour-piercing rocket; several pipe bombs, quantities of explosives, ammunition and associated component parts to construct a substantial number of explosive devices.

Police believe dissident republicans are behind the weapons stash and are investigating a link to a previous find of munitions at Carnfunnock Country Park in March.

The recovery of weapons is no doubt a setback for the dissidents but the former senior officer believes there could be more hides with ready to deploy devices.

“The sheer scale of it which indicates they have a substantial supply of weapons. Quite clearly there are still some people who are determined to continue on this campaign,” Mr McQuillan continued.

“The key issue is the intelligence, for the police and security services is to keep watching and keep on top of everything and keep doing everything they can to arrest those responsible and bring them before the courts.”

Speaking outside Stormont Castle, Deputy First Minister Martin McGuinness welcomed the arms seizure and called on the public to do their part to face down the threat from dissidents.

“I want to pay tribute both the Garda Síochána and the PSNI for the way in which over recent times they have thwarted the activities of those whose design is to plunge our society, our community, this island back to the past,” he said.

“That isn’t going to happen and I think that anytime whenever arms of the nature that have been recovered in the forest in Antrim over recent days, I am very pleased and delighted.

“I do think that given that the police have said the public were responsible for reporting this to the police, it does place a huge responsibility on the people who don’t want their children or their grandchildren to be plunged into the past to cooperate with police on both sides of the borders to ensure that those who are still dedicated to the destruction of the peace process don’t succeed.”

The senior Sinn Féin (MI6 Agent) politician added that following the crisis at Stormont last year when a murder was linked to the supposedly-defunct Provisional IRA, it was important that politicians stand together against violence.

“We have to stand together as politicians in support of our community, the police services north and south to ensure that these people are not successful,” he concluded.

Weapons Find Larne, Dissident Republicans, The IRA
at 11:15 AM
Email ThisBlogThis!Share to TwitterShare to FacebookShare to Pinterest