This is Sinn Fein/PIRA, British Finance Minister, Conor Murphy with the PIRA Commander, Frank 'One Shot' McCabe, whose gang members murdered 21-year-old Paul Quinn in County Monaghan in 2007. Security sources say the gang is made up of psychopaths and sex criminals, who do as they please as Sinn Fein mouth-pieces give them cover for their heinious crimes. 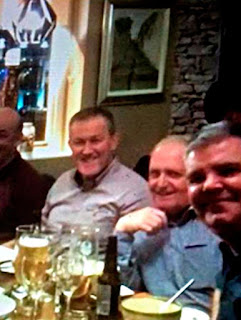 Sinn Fein/PIRA mouth-piece Murphy is photographed enjoying a meal and drinks with Frank 'One Shot' McCabe, and also socialising with him at the Sinn Fein/PIRA Newry and Armagh Christmas party just two months ago. 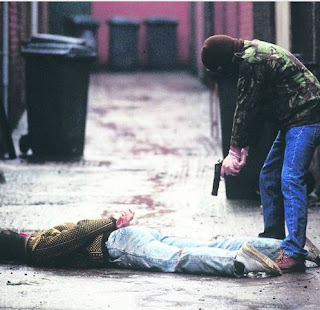 Dozens of young people who complained about being raped by Sinn Fein/PIRA members over the years were shot and beaten, while Sinn Fein/PIRA protected the rapists.

McCabe was the 'Officer Commanding' (OC) of the PIRA in South Armagh when its members lured the 21-year-old Cullyhanna man to a barn in Oram, Co Monaghan, and beat him to death with iron bars and nail-studded cudgels, they broke every bone in his body.

NOTE: This morning 3rd March 2020 Inland Revenue and Gardai are reporting that they are dealing with the discovery of yet another fuel laundering plant in Monaghan, such plants normally a shared operation between Sinn Fein/PIRA and their ‘Dissident’ cousins. The waste from these plants over the past 40 years have been responsible for the worst environmental pollution in Europe per-hectre, with significant cancer clusters identified in the areas where this waste continues to be dumped in the land and water.

Conor Murphy has again refused to state publicly that murdered south Armagh man Paul Quinn was not a criminal, Murphy maintains this position as he continues to socialise with the psychopaths who murdered Paul Quinn. Psychopaths who would have fitted well within the ranks of The Black and Tans. 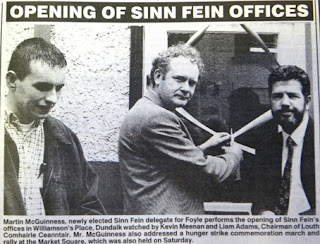 Conor Murphy, The British Finance Minister in the north, has been under pressure to make the public statement after retracting a claim he made 13 years ago that Mr Quinn had been involved in criminality.

Mr Quinn’s mother Breege has repeatedly called for the Sinn Fein/PIRA MLA to say publicly that her son was not a criminal, saying the slur on his name has compounded her family’s grief.

The 21-year-old from Cullyhanna was beaten to death by a gang of around a dozen Sinn Fein/PIRA members in a farm shed across the border near Castleblayney, Co Monaghan, in 2007.

His family blame members of the PIRA, but Sinn Fein/PIRA has long denied republican involvement, as they denied involvement in many atrocities over the past 40 years during which they murdered almost 3,000 (mainly civilians), maimed, mutilated, tortured, exiled and Raped thousands of other innocents.

The killing became one of the talking points of the Irish General Election as Mr Quinn’s mother called for the former Newry and Armagh MP Conor Murphy to be removed from his post as British Finance Minister over the comments. However, Mary Lou McDonald has absolutely no control over Conor Murphy who answers only to the PIRA Command Staff in south Armagh and they in turn answer to The PIRA Army Council. The same Army Council that has protected hundreds of sex criminals within their ranks including Gerry Adams Snr, Liam Adams, Seamus Marley, Marty Morris and so forth.

Sinn Fein have faced criticism from all shades of political opinion over its response to the killing.

On Monday 2nd March 2020, as he appeared at his first press conference at Stormont since the row, Conor Murphy refused to publicly state Mr Quinn was not a criminal.

“I made a statement in relation to that, I have written to the family and my offer to meet the family remains, I am happy to meet them at any time,” he said.

Mrs Quinn has said she will not meet Mr Murphy until he publicly states her son was not a criminal.