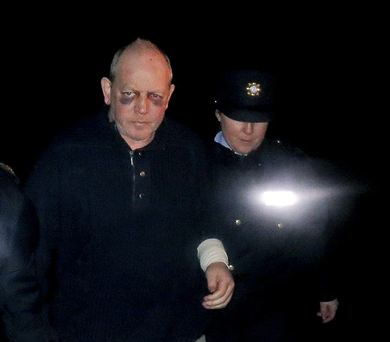 McAuley was escorted to Cavan District Court just before 5pm.

He sat silently during the brief hearing before Judge Cormac Dunne.

Inspector Seamus Boyle told the court that Mr McAuley made no reply when charged with the first offence of causing harm.

That charge was under Section 3 of the Non-Fatal Offences Against the Person Act.

Mr McAuley was also charged under the same act with making threats to kill or commit serious harm to Mr Seamus Leddy, who is understood to be a neighbour of Mrs McAuley’s at Kilnaleck, Co Cavan, on Christmas Eve.

Insp Boyle told the court that in reply to this charge Mr McAuley replied: “I don’t remember.”

McAuley was further charged under the same Section 5 of threatening to kill or commit harm to Mr Thomas Tully, brother of the injured party.

In reply to this charge, Insp Boyle told the court that McAuley replied: “I don’t know how I could have done that.”

The fourth charge, also under Section 5 of the act, was that Mr McAuley threatened to kill or commit serious harm to his wife, former Sinn Fein councillor Pauline Tully McAuley.

Insp Boyle said in reply to this charge, McAuley replied: “I don’t say I was going to do it.”
He added: “I didn’t set out to kill or harm Pauline McAuley.”

Solicitor for Mr McAuley, Erinn McKernan, said her client was unemployed and applied for legal aid.

Judge Dunne granted the application and remanded Mr McAuley in custody to appear before Harristown District Court on January 2.

McAuley’s court appearance came after he was released from hospital, where he had been treated for “underlying medical issues”, into Garda custody on Friday night.

His wife suffered serious injuries on Christmas Eve, but she is now said to be “doing well” and is expected to recover.
at 3:21 AM
Email ThisBlogThis!Share to TwitterShare to FacebookShare to Pinterest